Number Twenty-two of an Ongoing Series by Dick Henrywood

Please note that the information below for both series has been extensively updated and published in two chapters in Volume Four of Dick Henrywood’s The Transferware Recorder (2018).

It seems that I have rather neglected patterns based on literature in this series so far, so in an attempt to address the balance a little let us take a look at two different series, both based on the works of Lord Byron and both titled “Byron Gallery”.

A series depicting scenes and characters from Byron’s works, made by the partnerships of Goodwins & Harris and Goodwin, Harris & Goodwin of Lane End. The central scenes appear within an open border featuring fan-like motifs. The printed mark has the series title framed by scrolls on top of a banner with a quote from the appropriate scene and the individual title, then the maker’s initials G & H (or G H & G) above a floral garland. Some examples have an impressed mark for Goodwins & Harris. The series is found on dinner wares, printed in blue, brown or green.

Unidentified Scene A
Plate 22.6cm
This unidentified scene is known on a dessert plate which is marked “Bride of Abydos” although this is probably incorrect. It depicts a couple in a formal garden, the man on the left with his right arm pointing out of the picture.

A series by an unknown maker, again depicting scenes or characters from works by Byron. The central scenes appear within a narrow ornate frame, then a simple sheet geometric border with an outer band of stringing. The printed mark has the series title on a scroll over a lyre with the individual title in script beneath. The series is found on dinner wares, usually printed in two colours with a black or brown centre within a blue or green border, although plain blue has also been noted.

Both these series are uncommon with information scarce and illustrations few and far between. Shown here are samples of the two different marks and one scene on a plate from each series. Rather untypically, entries in the TCC database are also sparse, with only one pattern from each series. This is a golden opportunity for contributors to add to our knowledge. If you have any information at all or if you can provide images of any of the patterns, your help would be very much appreciated. Contributions, as usual, should be sent to henrywoodshighlights@transferwarecollectorsclub.org.

Typical mark from the Goodwin series, this example in green with pattern title “Mazeppa” and initials G.H. & G. 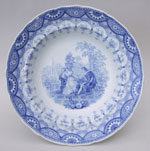 “Mazeppa” from the Goodwin series on a blue soup plate

Typical mark from the maker unknown series, this example in brown with pattern title “Don Juan”