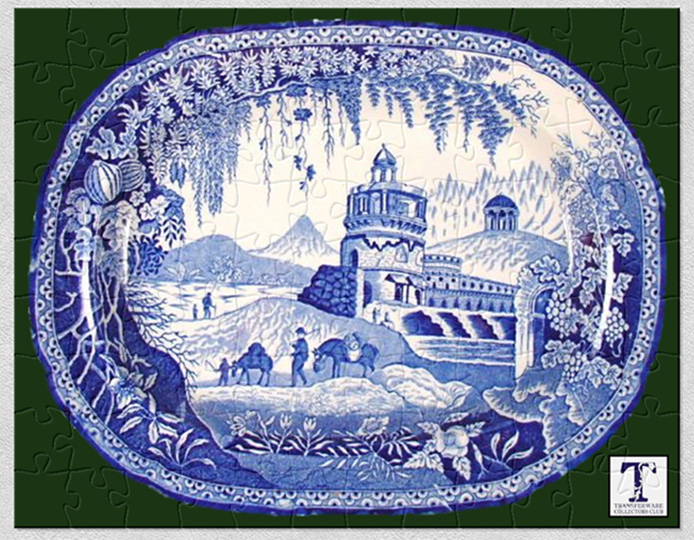 "Monopteros” pattern platter made by T. & J. Bevington & Co., Swansea, Wales. The pottery was in business from 1817 to 1824. This is Pattern # 1011 in the TCC Database of Patterns and Sources. The source print is titled “Remains of an Ancient Building Near Firoz Shah’s Cotilla, Delhi” and comes from “Oriental Scenery” by Thomas and William Daniell, published in London between 1795 and 1808. The same source print was used for versions of the pattern produced by Wood & Caldwell of Burslem, Staffordshire (in business 1790-1818) and John Rogers & Son, Longport, Staffordshire (in business 1815-1842).

Views of India were a popular theme on transferware in the first half of the 19th century, largely drawn from published books of prints like “Oriental Scenery."

Click on the dashed box at the top-right in the puzzle box below to open the puzzle to full screen. In the top left, you can change the number of pieces (100 pieces is the default), toggle piece rotation, and change the background color. Then hit “OK” and have fun!

View All Puzzles of the Month