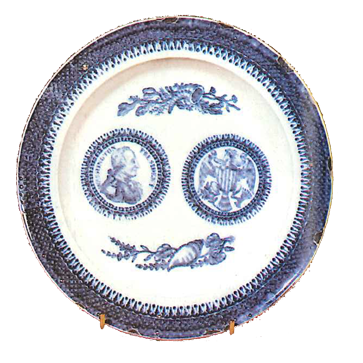 The Earliest Known Example of Historical Blue Staffordshire by Hayden Goldberg
This is one of four articles authored by transferware collector and researcher Hayden Goldberg and originally published in The Magazine ANTIQUES. This article appeared on pp. 178-182, July, 1981. Courtesy BMP Media Holdings, L.L.C. Each of the four articles is available for download at no cost to the reader. Read more. 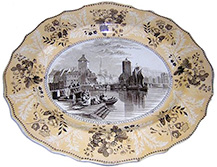 Enoch Wood's No.106 Series of European views was probably produced in the early to mid 1830s. Unlike many series of patterns dating from that time, it was not made in a variety of hues, but always in a very attractive two-color combination, a yellow printed border with contrasting floral sprays and central design in brown or black. Yellow, of course, is the rarest of transferware colors, and it follows that items in this series are also uncommon. At best the average collector might hope to encounter a stray plate here and there, often "Oberwessel on the Rhine". But a few years ago Judie Siddall was lucky enough to get pictures of a number of items from a complete dinner service. When the owner had bought the set she had no idea of its rarity or value, only that she liked it. She generously shared pictures of what she had, and those comprise the majority of the patterns represented in the database. Read more.