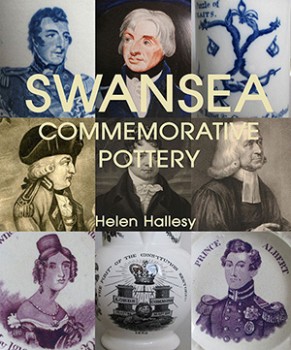 Politics  Reform  Royalty  Wars
The focus of the book is on a relatively small group of wares produced at the Swansea potteries in South Wales, generally classed as ‘commemoratives’, sometimes documentary, certainly historical. The aim has been to discover and record the primary source materials from which the engravers and artists at Swansea worked. Ceramic manufacturers depended on London print shops to provide the sources from which the engravers could derive inspiration and subsequently copy; many of the Swansea designs can be traced to contemporary prints published at that time.

There are 24 chapters with over 200 coloured illustrations.

The subjects under review follow a consecutive path beginning with Admiral Rodney’s involvement in the American War of Independence  in 1781 and progress through the military and naval events of the Napoleonic wars with France including chapters on Nelson, Wellington, The Duke of York and  Napoleon Bonaparte. Political issues such as the Reform Act of 1832 are discussed and the lives of the social reformers Daniel O’Connell, Father Mathew, Rev. John Wesley and others, men who promoted causes aimed at improving living conditions and laws relating to the working classes, were also celebrated. Royal subjects including Queen Victoria and Royal Albert are also illustrated. Throughout the book the transfers on pottery are compared with the original primary source print or engraving.

Examples are taken from both commercial potteries at Swansea and reflect the maker’s vision of some snapshots of history as seen through the eyes of the pottery workers.

How to Order
Price UK £38
Price to TCC members £30
Postage determined when order is placed
Pay via paypal.me/Helen Hallesy