Queensware Direct from the Potteries U. S. Importers of Staffordshire Ceramics In Antebellum America: 1820 - 1860 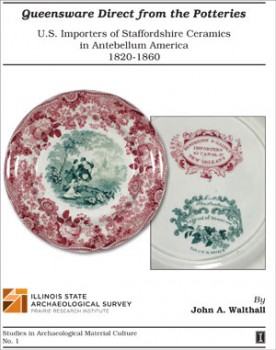 This 2015 Revised and Expanded Edition, written by an archaeologist, concerns the use of underglaze U. S. importers marks on Staffordshire pottery made during the American Antebellum Period (1820-1860). Over 100 such importers are listed in this directory, which geographically spans the entire country, from Massachusetts to California and from the Great Lakes to the Gulf Coast. Placing the name of American importers of Staffordshire earthenware in under glaze transfer print demonstrated to the buying public that these local merchants had special ties to the English manufacturers which, it was thought, would enhance the chances of the importers not only obtaining the latest fashions promptly but also comparatively cheaply. This strategy was successful decade after decade, until new technology and inexpensive rail transportation in the late 19th century allowed industrial potteries in Ohio and elsewhere in the United States to capture the ceramic tableware market from their British rivals.
Since the importer data base presented in the book owes so much to the generosity of many researchers, it is fitting that it be made available as an Internet Publication which can be used by the widest audience of interested scholars. This format also allows the revision of the data base as new information becomes available (and it surely will). It also allowed the use of large numbers of color illustrations of Staffordshire vessels with importers backmarks. This 330 page book is the most detailed study yet written concerning pre-Civil War American importers of Staffordshire pottery and their British trading partners.

This well-illustrated, and detailed book should serve as a baseline study for future research into this most ubiquitous of artifacts found on early to mid-nineteenth century American archaeological sites – fragments of Staffordshire table and tea wares.

Request for Help with Importers Study
The author writes "I am in the process of revising the recently published ebook, Queensware Direct from the Potteries: U. S. Importers of Staffordshire Ceramics in Antebellum America, 1820 – 1860. I have a few more importer’s marks to add to the Directory, some updates, etc. I would greatly appreciate any help that TCC members can provide in my effort to make this research tool as complete and useful as possible." Email John Walthall.