Number Seventeen of an Ongoing Series by Dick Henrywood

My previous outing was devoted to a group of the later aesthetic period wares (William Alsager Adderley’s “Anglais” series) and did produce some feedback. In that case it extended to identification of one unknown view and several additions to the lists of items, all subsequently reported in the Bulletin, but such success does expand knowledge for all of us and helps to justify articles such as these. This time I am returning to the romantic period of the 1830s for a series which is only sparsely recorded.

A series of romantic views by Chetham & Robinson of Longton. The scenes appear within an open floral border typical of the 1830s. The printed mark is in the form of a small vignette scene with “TERNI” on a panel across the middle and the individual title in script curving beneath followed by the maker’s initials. Some examples bear an impressed fouled anchor mark. The series appears on wavy-edged dinner wares, predominantly printed in blue although green and purple are also known.

No source for the scenes has yet been identified, and their clearly romantic nature suggests that they might be invented, rather than copied from any source prints.

Several examples have been noted with incorrect title marks and with relatively few scenes previously recorded, it is possible that some of the pieces listed below were actually mismarked. Further confirmation of all the patterns and titles is desirable.

"A View from the River Yar" *
Well-and-tree platter 21in

“View from the Lake Celano”
Platter 20in
The platter recorded here was decorated with the same view as the “View from the River Arno” platter listed below which suggests that one or other must be mismarked.

“View from the Lake Como”
Platter 17.5in
Platter 14.5in
Stand for soup tureen
Soup tureen

"View from the River Arno" *
Platter 19.5in
See the note under “View from the Lake Celano” above. The river name may be either “Arno” or “Arne”.

As usual, asterisks indicate information (such as titles) which have not been confirmed. It can be seen that there are conflicts with at least two of the titles. This series does not feature significantly in the usual transferware publications and at the time of writing only one view appears in the TCC database. So there must be other items or scenes to be found and I hope TCC members might help to expand our knowledge. Contributions should be sent to henrywoodshighlights@transferwarecollectorsclub.org, with images particularly welcome. Please also note the need for decent images of the patterns listed above to add to our database. 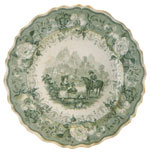 “A Romantic District of Italy” dinner plate in green