Number Eighteen of an Ongoing Series by Dick Henrywood

This column hopefully fulfills a dual purpose – reporting on known patterns in a particular series while at the same time seeking news of additional patterns, images or further information. For this issue I have chosen a very short series (of just three known patterns) whose maker remains a mystery.

“The Sun of Righteousness” series

A series of biblical figure scenes, typical of the early 1830s, by an unknown maker. Each central scene is titled at its base and appears within an open border of fruit and flower panels with the top panel showing a rising sun with the series title in script beneath it. Most examples are unmarked. The series appears on wavy-edged plates, predominantly printed in purple or red, although brown and black are also known.

The maker is unidentified, although one early attribution suggested Enoch Wood & Sons and Laidacker gave initials KEB (for Knight, Elkin & Bridgwood). The current author believes the latter might have been in error based on the maker’s somewhat similar “Scripture Illustrations” series. Impressed marks in the form of a fouled anchor and a circular propeller device have been noted, the latter known on wares by Joseph Heath & Co.

No source for the scenes has yet been identified although one has been noted in the form of an illustration in The Child’s Bible (late-19th century), presumably a copy from an earlier engraving.

The three recorded scenes are:

“Samuel”
Dinner plate
This scene depicts the infant Samuel at prayer and may be a title variant of the “Speak Lord...“ pattern below.

The latter two patterns feature in the TCC database. It appears that they were printed only on dinner and dessert plates and any other items would be of great interest. Does anyone have an illustration of the variant titled “Samuel” or know of any other scenes or colours? Contributions should be sent to henrywoodshighlights@transferwarecollectorsclub.org, with images particularly welcome.

“Speak, Lord, for Thy Servant Heareth”, brown dessert plate 9 in 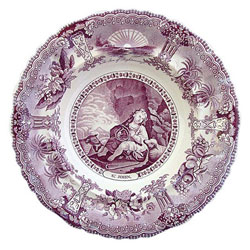