Number Thirteen of an Ongoing Series by Dick Henrywood

At the risk of repeating myself yet again, the object of this series of articles is to record and hopefully expand our knowledge of transferware patterns. For this thirteenth, hopefully not unlucky, outing I have chosen to feature another rather mixed series of views which cover Britain, Europe and North America:

A somewhat uncommon and rather eclectic series of individually titled views of Britain, Europe and America, usually attributed to Thomas Dimmock & Co. of Shelton and Hanley. The central scenes are printed within a border of scrolls and small flowers. The printed mark is in the form of an ornate scroll cartouche containing the individual title in script with the series title above and “stone ware” (in lower case) with the maker’s single initial D at the base (hence the attribution to Dimmock). The series is found on dinner wares printed in blue, brown, green, purple, or red, with some two-colour examples known with black central scenes within blue or green borders or green within brown.

The sources for several of the views have been identified and, as may be expected, they are copied from engravings in books from the early 1830s. At least four different books were used for the English and European scenes.

Bay of Naples (title not known)
Platter 21in
Illustrations: TCC VIII/1 (mismarked platter)
The only example of this view currently recorded is incorrectly titled “New York” although the view clearly depicts the Bay of Naples with Vesuvius in the distance.

Unidentified Scene B
Cover for sauce tureen
A vignette with a church and tower on the left bank of a river.

As is usual in these lists an asterisk indicates a title or item that is unconfirmed. I am rather short of images for this series so am able to offer illustrations of only four different scenes here and must record thanks to Michael Grana and Craig & Betty Anne Luczynski. Just five of the twelve views listed above feature in the TCC database. This list is clearly incomplete and there must be other platters and a drainer or two, and possibly other wares.  Can anyone help in eliminating some of the asterisks or add any more items or titles.  Contributions should be sent to henrywoodshighlights@transferwarecollectorsclub.org, with images particularly welcome. 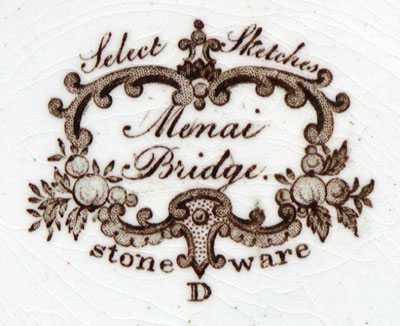 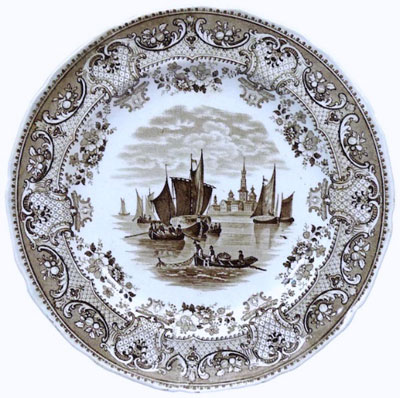 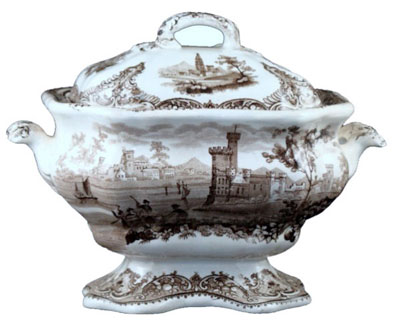 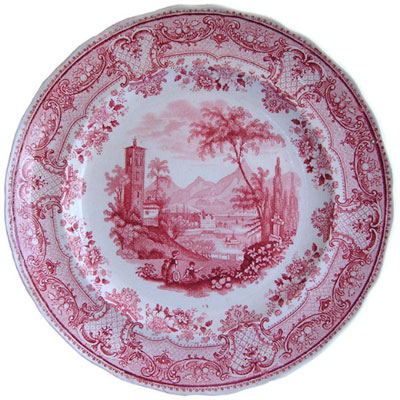 "Lake of Como” plate in red 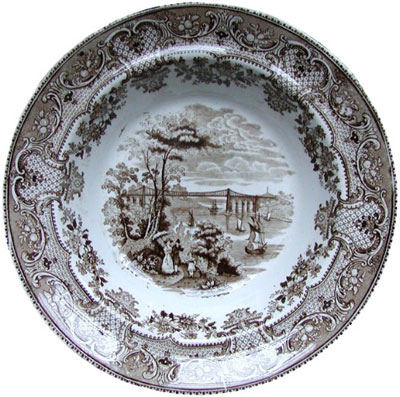