Number Twenty-one of an Ongoing Series by Dick Henrywood

Please note that the information below has been extensively updated and published in Volume Four of Dick Henrywood’s The Transferware Recorder (2018).

With the coming-of-age of this column (“never been twenty-one before”), I thought I would go for something a bit different again. As children we were probably all told stories about the famous outlaw Robin Hood and the wicked Sheriff of Nottingham, or even watched a series on television. Now, as adults, we might like to know that a few of his escapades have been immortalised on transferware.

A small series of scenes in the life of Robin Hood originally issued by Bailey & Ball of Longton. The printed mark is usually in the form of a circular belt inscribed with the series title “ROBIN HOOD” and enclosing the maker’s initials B&B in script, with an unexplained number “150” on the looped tail-end of the belt. Others are marked with a registration diamond for 15 November 1845, parcel 2, which relates to a distinctive hexagonal shape used for jugs, jars and vases, rather than the printed pattern. Later examples have the B&B initials replaced by H&B, presumably for Hampson & Broadhurst of Longton, or by the full name and address “J. BROADHURST / & SONS / LONGTON” (with the “150” removed from the end of the belt). The series has been noted on jugs (of various shapes), mugs and jars, printed in blue, red, brown or black, sometimes crudely highlighted with enamel colours.

Three of these patterns are recorded in the TCC database (and the other three are also covered) but the only printed images I can find are of a storage jar in Gillian Neale’s Encyclopedia of British Transfer-Printed Pottery Patterns and a mug in Noel Riley’s Gifts for Good Children. Can anyone out there add any information or good images? Responses should be sent to henrywoodshighlights@transferwarecollectorsclub.org. 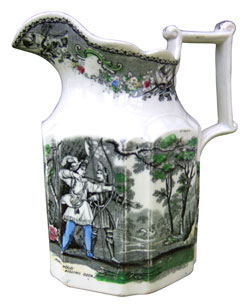 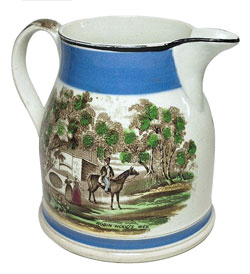 “Robin Hood’s Well” on a brown and coloured dumpy jug