Number Fifteen of an Ongoing Series by Dick Henrywood

With a disappointing lack of response from the last “Highlights”, for this latest outing I hope we might do better with another of my more usual series of titled scenes. Back in my very first column I looked at the Elijah Mayer “Illustrations of the Bible” series and there is another similar series titled “Holy Bible” by the Jacksons which features similar views, both of which are quite well known, but there is a third series of views in Palestine of which very little is known.

A series of views of Palestine made by Elijah Jones of the Villa Pottery, Cobridge. The central scenes appear within a wide border of flower groups and foliate scrolls with an inner band of radiating branches. The printed mark is in the form of a small vignette of a well surrounded by flowers and foliage, the structure inscribed with a trade name “GRANITE WARE”, the series title “PALESTINE”, and the maker’s initials EJ. Some examples, presumably later issues, are known where EJ is replaced by the single initial W, almost certainly referring to Edward Walley who succeeded Elijah Jones at the Villa Pottery following a short partnership as Jones & Walley. The series is found only on dinner wares, printed in blue, red or mulberry, but other colours might well exist. No source prints have yet been identified.

With just two illustrations in the Williams & Weber books this series was virtually unrecorded until Margie Williams brought information together and illustrated three scenes in her The Charm of English Pink (2008). The series is not currently recorded in the TCC database but I can show two good examples here, including one which is previously unrecorded.

This list is woefully incomplete, featuring just four assorted plates, and there must be platters, dishes and tureens, possibly a couple of smaller plates, and all the other items which usually made up a dinner service. This is one of the classic cases where TCC members should be able to expand our knowledge. Contributions should be sent to henrywoodshighlights@transferwarecollectorsclub.org, with images particularly welcome. 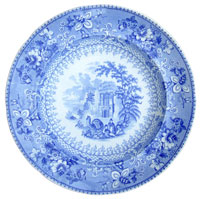 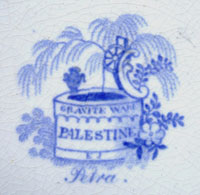 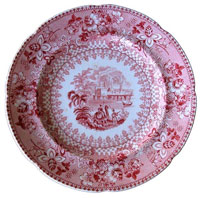 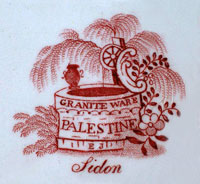