Number Nineteen of an Ongoing Series by Dick Henrywood

This column hopefully fulfills a dual purpose – reporting on known patterns in a particular series while at the same time seeking news of additional patterns, images or further information. For this issue I thought a change from the more usual views or scenic patterns might be appreciated.

A group of three patterns depicting sailing ships by an unknown maker. Each central scene is titled at its base and is printed with simple black-lining on the rims of plates. All recorded examples are unmarked and the only colour known is black, although a few examples have the design highlighted in colour.

The maker is unidentified and Liverpool, Staffordshire or Swansea origins have all been suggested.

The three recorded scenes are:

“East Indiaman Sailing from the Downs”
Plate 10in
Plate 9in
Jug 7.5in

“East Indiaman Taking a Pilot on Board”
Plate 9in

The two “East Indiaman” scenes are copied from rather fine aquatints after the artist Robert Dodd, originally published in 1787 and 1788 although later copies exist and may have been used by the pottery engravers.

All three of these patterns feature in the TCC database but only on the plates. Any items other than plates or jugs would be of great interest as, of course, would be any similar titles not listed above. Contributions should be sent to henrywoodshighlights@transferwarecollectorsclub.org with images particularly welcome. 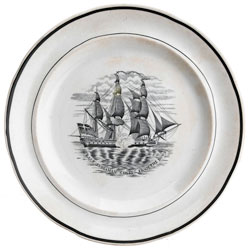 “East Indiaman Sailing from the Downs” 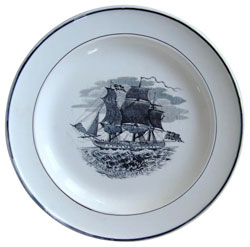 “East Indiaman Taking a Pilot on Board” 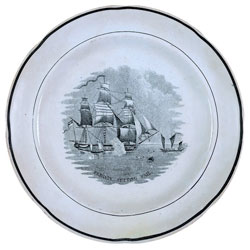