Number Sixteen of an Ongoing Series by Dick Henrywood

Please note that the information below has been extensively updated and published in Volume Two of Dick Henrywood’s The Transferware Recorder (2015).

In looking back over previous “Highlights” when assembling one of my talks for the Baltimore meeting, I realized that I have completely neglected later wares. Although my own interest is rooted in the vintage period between about 1810 and 1835, some excellent products appeared both earlier and later, and to try to address the balance, I thought I would look at a series of views from the aesthetic period. My first choice was Wallis Gimson’s “The World” series, but that seems to be quite well documented in the database, so I have elected to look at a similar but less common series.

An aesthetic-style series registered on 20 October 1883 by William Alsager Adderley of Longton. The patterns mostly feature two views, a prominent main scene printed within a rustic frame and a smaller vignette in a circular or rectangular frame, all encrusted and surrounded by sprays of flowers and leaves. The titles usually appear in a corner of each view. The printed mark incorporates a registration diamond with the series title “ANGLAIS” beneath and most examples also bear a circular ship trademark accompanied by the maker’s initials WAA. Some also bear an impressed mark featuring initials WAA and the trade name “IVORY”. Examples noted to date are dinner wares (with platters octagonal in shape) and teawares, usually printed in brown, sometimes picked out in colours and occasionally with a gilt rim, or less commonly in green.

No source for the views has yet been identified.

“Windsor Castle” / “Holyrood Palace”
Circular plate 7.5in
Saucer
The cup which matches the saucer has untitled animal and bird scenes.

Unidentified Scene A
Circular plate 10in (25.5cm)
Circular soup plate 10.375in (26.5cm)
An ornate castle standing behind a river. The main scene is accompanied by a small circular vignette of a huntsman with two dogs.

I have been unable to confirm the “Hughenden Manor” view. As with many of the aesthetic period wares, this series does not feature in the usual transferware publications but it is recorded in the TCC database, including the three examples illustrated here.

As usual there must be other items or scenes to be found and I hope TCC members might help to expand our knowledge. Contributions should be sent to henrywoodshighlights@transferwarecollectorsclub.org, with images particularly welcome. 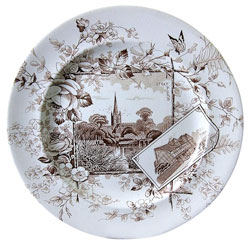 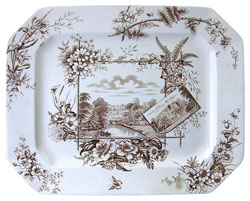 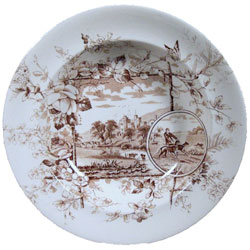