Contribution of the Month (Read More)

No two bottle ovens or kilns were the same. Many, almost all of them, were built without architects drawings or plans. They were built 'by eye' based on the experience of the builder and the verbal requirements of the factory owner. Bottle oven builders were known to build an oven from scratch in 6 weeks.

The terms, bottle oven and bottle kiln, are often used interchangeably but this can sometimes get confusing. To most of us they mean the same thing - a complex brick-built, bottle-shaped structure for the firing of pottery or associated materials. But there is a technical difference between the two.

Within the Staffordshire pottery industry, bottle oven usually meant the potters' oven used for the firing of biscuit or glost pottery. The oven had an open flame which passed from the firemouths directly into the firing chamber to envelop its contents.

But a bottle kiln was designed and built differently. A potter's muffle kiln was constructed in such a way that the products of combustion (flames, gases, smoke, sulphur fumes, ashes and dust) were not allowed to come into contact with the pottery being fired, being circulated through flues surrounding an enclosed firing chamber containing the pottery. Muffle kilns of this type included enamel and hardening-on kilns, both used in the decorating process.

In a muffle kiln no saggars were required but the delicate colours of the decorated pottery were still protected. The firemouths were kept separate from the kiln chamber, sometimes outside.

A muffle kiln was a lot smaller than the other types of bottle oven and temperatures reached were lower at around 800 -850oC. This temperature made the decorated colours permanent (without firing, the colours would easily rub or wash off) and did not need the higher temperatures required biscuit and glost.

There is an important and unique example of a decorators muffle kiln at Gladstone Pottery Museum in Longton, Stoke-on-Trent.

An Introduction to the Bottle Oven
Iconic biscuit oven at the Gladstone Pottery Museum, Longton, Stoke-on-Trent.

Huge brick-built bottle ovens, integral to a pottery factory and essential in pottery manufacture, were once the dominant feature of the Potteries landscape. At their peak, around 2,000 existed in the City of Stoke-on-Trent, Staffordshire.

Most of them were fired once a week, some twice. At each firing at least 10 tons of coal was burnt in each oven. Some very large ovens used over 30 tons per firing. Thick, black, choking smoke filled the air. However the Clean Air Act of 1956 put a stop to their use and sealed the fate of the traditional coal-fired oven. Pottery manufacturers were allowed seven years to find alternative fuels. The race to demolish the redundant ovens, and rid the area of its grim past, began.

In 2019 only 47 remain standing complete with their bottle shaped chimney. Of those only 29 are potters’ ovens, used for biscuit, or glost pottery firings.

18 of these examples are within a short walk of Gladstone Pottery Museum in Longton. The rest of the bottle-shaped structures are scattered throughout the city and were used as calcining or decorating kilns. Many of those that remain are in a very fragile condition. All are Listed Buildings and all, from May 2018, are part of the Stoke-on-Trent's Heritage Action Zone.

A bottle oven is a brick-built, bottle-shaped structure in which pottery, or its component materials were fired. The simplest type, the updraught hovel oven, consists of two main parts.

The outer part, is known as the hovel. This could be up to 70 feet (21m) high. All hovels had one distinctive and common feature, the bottle shape. This shape, with its wide base and narrow neck, evolved to accommodate the firing chamber. The tapering chimney was better for creating draught which aided the firing process and helped to take away smoke. It also aided protection from bad weather.

The inner part is the firing chamber. It is a cylindrical structure with a domed roof called the crown. Its walls are about 12” (30cm) thick. Iron bands, known as bonts, run right round the firing chamber, about 12” (30cm) apart, to strengthen it as it expands and contracts during firing. A doorway, the wicket, just large enough for a man with a saggar on his head to pass through, is built into the chamber.

A sufficient gap between the firing chamber and the hovel gave enough space for the fireman and his ovenmen to work, firing the oven.

Bottle ovens have a peculiar fascination. No two of them are alike. They seem as full of character and offer as many surprises as human beings, and in temperament they were as volatile and unpredictable. A firemen had to learn how best to work with them, to control and cajole the way they performed and fired. 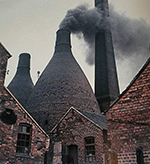 "This occasioned such immense and constant volumes of smoke, as literally to envelope the whole neighbourhood: and it was not infrequent for passengers to mistake their way, and run against each other, during the continuance of this process. The scene which presented itself upon these occasions, has been not inaptly compared to the emissions from Etna and Vesuvius..." from: A Topographical History of Staffordshire: Including Its Agriculture, Mines ... By William Pitt 1817

The firing of a bottle oven or muffle kiln was a profession in itself. It was an important and revered job. There was so much at stake. A successful fireman required years of experience since just a few minutes ignorance or carelessness could often mean ruin to the oven’s contents, and to the factory.

The final temperature to be attained must be as even as possible throughout the firing chamber. The long flames produced by bituminous coal carried heat to the middle of the setting. Temperature rise had to be carefully controlled, as a satisfactory finished article depended on the time it was subjected to the heat, at varying degrees of temperature.

In bigger ovens a ton of coal could be fed into the firemouths within the space of minutes. Baitings such as these created massive volumes of thick, black, choking smoke which enveloped the surrounding streets. Both the factory workers and their innocent neighbours were subjected to unacceptably high levels of pollution and their health inevitably suffered.

In the early 1950s the UK government concluded that they needed to introduce laws to curtail the production of dark smoke and on 5th July 1956 passed the Clean Air Act - "An Act to make provision for abating the pollution of the air" The essence of the Act was that '… dark smoke shall not be emitted from a chimney of any building, and if, on any day, dark smoke is so emitted, the occupier of the building shall be guilty of an offence."

Pottery manufacturers were given seven years to make provisions to fully comply with the Act. Use of the familiar bottle-shaped oven, fired with coal, declined and by 1963 their fate was finally sealed. Of the 2000 or so bottle ovens which once littered the skyline of the Potteries only 47 remain standing complete today (2019).