TRANSFERWARE WORLDWIDE LECTURE SERIES - Transferware at the End of the World: Archaeology of a 19th Century Shipping Cargo in the Cape Horn Route 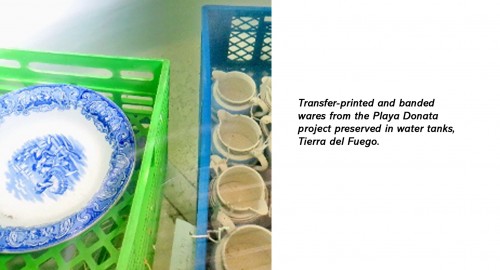 Title: Transferware at the End of the World: Archaeology of a 19th Century Shipping Cargo in the Cape Horn Route

Lecturer:  Dolores Elkin. Dr. Elkin is an archaeologist with Argentina´s National Council for Scientific and Technical Research (CONICET) based at the National Institute of Anthropology.

Members, please check your email in early June for the Zoom link to this lecture. Non-members are also welcome to view future Transferware Worldwide lectures: simply provide your email address to receive the Zoom links and news and information about future TCC programming.

Description: Between 2016 and 2017 an archaeological rescue project was implemented after the accidental discovery on the coast of Tierra del Fuego, Argentina of what looked like a historic ship´s cargo. The assemblage was formed by a group of crates mainly containing 19th century English ceramics. Among the crates were transfer decorated pieces which allowed the first chronological and cultural assessment of the site. This lecture will provide a detailed illustration of the transferware items found and reveal various research strands related to the commercial exportation of British goods along the Cape Hoorn route.

Our Speaker: Dolores Elkin graduated with a Doctoral degree from the University of Buenos Aires in 1996. That same year, she created the first Underwater Archaeology Program in Argentina. The goal was to initiate research of underwater archaeological sites as well as to create public awareness of their significant cultural heritage.

A professor at both the University of Buenos Aires and the National University of the Central Province of Buenos Aires, Dr. Elkin has lectured on both the undergraduate and postgraduate levels. As an experienced diver, she engages with the sport and professional diving community and fosters joint efforts to preserve Argentina’s submerged cultural heritage.

Dr. Elkin has led several nationally and internationally funded projects involving shipwrecks from the 18th, 19th and 20th centuries located in Patagonia and Tierra del Fuego. Her work has resulted in an extensive publication record intended for both the academic community and the public at large. As an elected member and former president of the Scientific and Technical Advisory Body to the UNESCO Convention for the Protection of the Underwater Cultural Heritage, she has also organized and participated in numerous national and international scientific events.