Patterns of the Month

Search the Database of Patterns & Sources

Each month we feature a new pattern from our Pattern and Source Print Database and archive them on these pages.

Members only: for more information about these patterns and to see other similar patterns, search the Pattern and Source Print Database.

Seen is the “Alaska” pattern by Ralph Hammersley (& Son), 1859-1905. It is an Aesthetic pattern in the Japanesque style that was popular at the end of the 19th century. The name, “Alaska,” seems to have little to do with the pattern. 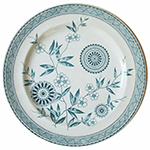 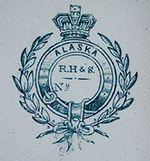 Plate, 4.5 inches.  It is printed with a lower case alphabet that is out of order.  Used as a teaching tool, the child had to pick out the letters and put them in sequence.  Try it!  It is not easy.

This 10.5 inch plate depicts at least one of nine scenes from this series of patterns illustrating the travels of Sir Edward William Parry around the northern part of Canada.  The animals in the border, however, are distinctly tropical!

Shown is an octagonal plate with an heraldic pattern depicting the Arms of Newcastle-upon-Tyne. Its motto "Fortiter Defendit Triumphans" ([She] Bravely Defends and Triumphs) honored the brave people of Newcastle in the English Civil War (1642-1651).

Enoch Wood & Sons Mark"The Baltimore & Ohio Railroad" by Enoch Wood & Sons (1818-1846) is found on a 10 inch plate.  This is the level version of the pattern, as there is an incline version.    The pattern is from the Shell Border Series - Circular Center. 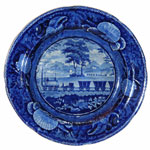 Battle of Bunker HillShown is a 14 inch platter made by Ralph Stevenson (& Son) 1810-1835. It is part of the Vine Border Series, where nearly each size and shape features a different view. Here, the title of the view is "Battle of Bunker Hill," which is sometimes referred to as Bunkers Hill.

Known as "The Bewick Stag", this 9.5 inch pearlware plate is printed in underglaze blue by Minton. A General History of Quadrupeds (1790) by Thomas Bewick (1753-1828) pictures the Stag or Red Deer. He stands at the center of this earthenware dinner plate. Behind him are two smaller stags and, perhaps, a female deer. The border consists of vignettes which Bewick used on the his title pages or at the end of his descriptions of animals. Two have been identified. One is called "A Crouching Leopard Ready to Spring" c. 1792, which appears in the third edition of Quadrupeds, p. 92. The other is "Dogs Disputing", which appears in the 1826 edition of Bewick's Water Birds, p. 414. The other vignettes may also be by Bewick or by one of his apprentices. The "Crouching Leopard" vignette was used as the central pattern by other makers. 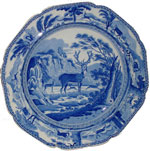 Shown is a 9.5 inch plate made by Pinder, Bourne & Co. (1862-1882). The Registry diamond indicates a date of May 29, 1879. The striking blue transfer vase and the Chrysanthemums are the only parts of the pattern that are transferred. The textured gold background and the table have been hand painted. This is also true of the image of the man holding a jug in the vase medallion. The pattern has a TCC assigned name. 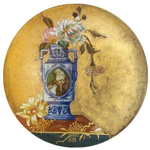 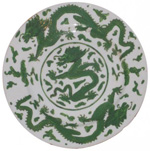 Char Dish markSeen is a 9.25 inch dish made by Spode (1770-1833) in the early part of the 19th century. The dish was probably intended for serving potted char. The Arctic or sub-Arctic char is both a fresh water and salt water fish. It is similar to trout or salmon, and is found in very cold lakes and coastal waters.

Shown here on a 6.31 inch child's plate are hands illustrating the sign language alphabet consonants in two circles surrounding a single hand showing the vowels. Children's patterns were often used as teaching tools, and this one would be as useful today as it was in the 19th century. However, the alphabet is an example of the British manual alphabet which uses two hands rather than the American manual alphabet which uses one hand.

Children's patterns were often given as rewards for good behavior, christening presents and teaching tools. Children, in general, like animals, so this 5.75 inch plate with an exotic animal would have been a delightful gift.

Shown is a 9.25 inch soup plate printed in blue with a Chinese dragon.  A pseudo Chinese mark is printed on the back.  The pattern is based on a Chinese original design. 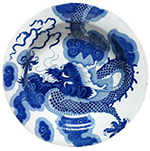 Shown is an Enoch Wood & Sons (1818-1846) 9 inch plate named “Chinese Phoenix” by the TCC.  The dark blue color indicates that the pattern was made for the American Market. 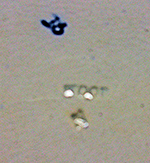 Shown is a 13 by 10 inch platter in the “Clyde Scenery” series by John & Job Jackson (1831-1835). The pattern here is “Blythswood House.” In addition to purple, the pattern was printed in blue, black, brown, pink, green and two color. The TCC Database of Patterns and Sources shows 23 patterns in this series.

Shown is an earthenware 8 inch plate in the pattern known as "Dagger Border Class V." It was made by Wood & Caldwell (1790-1818), and is based on a Chinese hand-painted porcelain original. 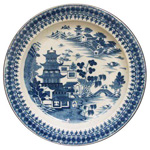 Dragon and the Phoenix

Shown is an eight inch porcelain dish that is printed in underglaze black and painted in green. It was made by Machin & Co. (1802-1831). The pattern number, which is painted on the back of the dish, is “862.” The pattern shows both the dragon and the phoenix.

Entrance to the Liverpool & Manchester Railway

Shown is a 4 inch planter in a British Themes Commemorative pattern titled “Entrance to the Liverpool & Manchester Railway.” The maker is unknown. This is a view of the famed Moorish Arch at Edge Hill in Liverpool, built in 1829 as part of the Liverpool & Manchester Railway which opened in 1830. It was the first railway line to carry passengers. The first photo shows the arch, and the second photo shows the train.

Geese with Peonies and Feathers 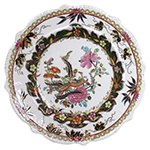 “Genuine Bears Grease” 2.8 inch pot lid. John Gosnell & Co. was the importer. Bear’s grease was used as a pomade for men’s hair. When the supply of bears decreased, pomade was made from cow's grease.

"Harvard College" by Enoch Wood & Sons (1818-1846).This 10.5 inch plate is printed in dark brown, and is from Wood's Celtic China series, probably circa 1835-1846. David and Linda Arman in Historical Staffordshire, An Illustrated Check-List (1974) list 18 views in this series. The series, printed in black, brown, purple, light blue, pink and green, portrays scenic views of historical America. 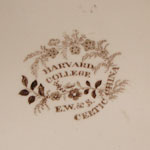 Seen here is a 2.35 inch tall and 2.5 inch wide child's (note the cartoon-like eagle) yellow glazed mug which appears to be a commemorative piece. Thomas Jefferson (April 13, 1743 - July 4, 1826) was the third President of the United States (1801-1809) and the principal author of the Declaration of Independence. This pattern belongs in the American Themes category. 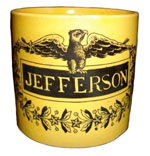 Seen is pattern no. 63 in the series known as the Kennard Birds and Fish Series. The mark includes the name of the artist, Edward Kennard (1842-1910), as well as the manufacturer, T.C. Brown-Westhead, Moore & Co. (1862-1902), and the retailer, John Mortlock. The pattern is part of a dinner service of 100 pieces decorated with birds, fish and other animals in a natural setting.

Shown is a 6.5 inch plate titled “Lady Godiva and Peeping Tom of Coventry.” The source print for the pattern is from the “History of Covertry,” which was published in 1852.