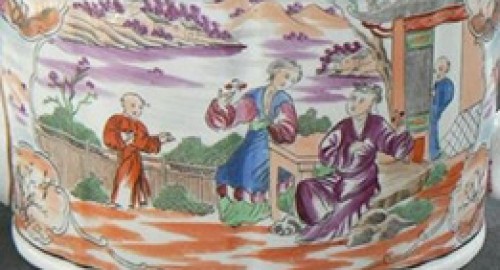 A distinct type of English filled-in transfer on pearlware appeared for a brief period in the 1820s, during the reign of George IV, made by some 17 small factories. Predominately jugs and mugs, they stand out with their brightly enamelled colouring on deep blue backgrounds, with transfer patterns that reflect the popular taste for Chinoiserie at the time. Of this filled-in transfer type on pearlware, the most common and widely copied pattern is ‘Boy in the door’, but a dozen or so other patterns have been found in this genre. Read more. 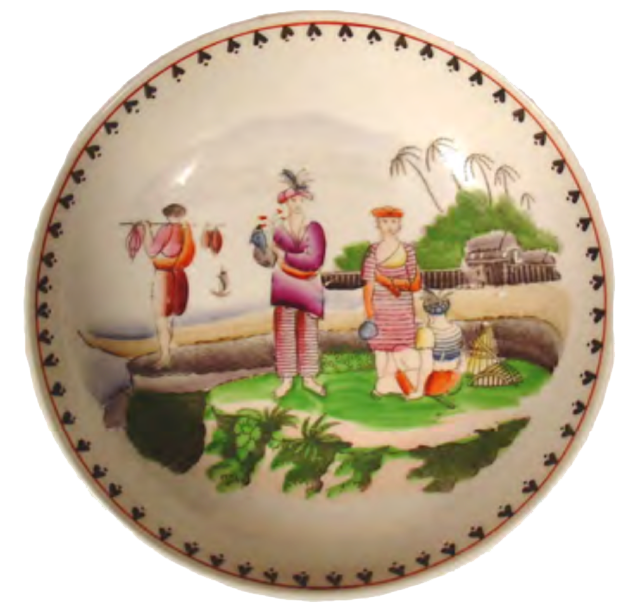 Artists Thomas and William Daniell, uncle and nephew, are best known for their monumental work, Oriental Scenery (1795-1808), a collection of 144 elephant-folio size aquatints illustrating scenes of India from their eight-year sojourn there.

Many of those aquatints were used by potters in the 1820s as sources for Indian patterns on transferware. However, in order to get to India, the Daniells had to travel on East India Company ships first to China and then back-track to India. It is not recorded how long they remained in China, or for that matter, how long they were in China at the end of their journey waiting for a ship back to England. Read more.