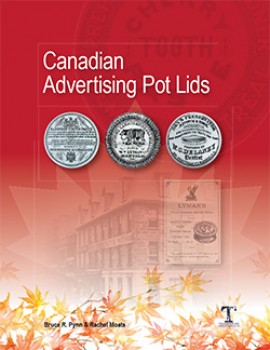 Advertising pot lids can be found from many countries particularly English speaking nations and are collected by a dedicated group of enthusiasts across the world. These fascinating transfer-printed ceramic containers often feature inventive designs and typefaces as well as details of the individuals and companies that sold them. They were used to retail a broad range of commodities and the vast majority were originally thrown away after a single use. In the last 50 years or so, they have been re-discovered from the excavation of former rubbish tips.

These containers became available due to pioneering developments in the pottery industry. The creation of wares than were durable, alongside advances in transfer printing, paved the way for mass production. Staffordshire, England became a key production centre that also supplied a hungry export market. The excavation of several rubbish tips from several former Staffordshire potteries has confirmed that some of Canada’s pot lids were sourced and manufactured in the UK. These pot lids are often the only tangible evidence of long defunct businesses that elected to use the latest form of packaging. Canada, in comparison to many other countries, records relatively few examples although there are a number that are highly appealing and desirable. Over the past decade or so, the prices for coveted examples have achieved astronomical sums as collectors have recognised their rarity and historical significance.

This guide is the first time that all-known Canadian pot lids have been carefully catalogued and the history of the businesses that sold them properly researched. They represent an important part of our social development highlighting sophisticated marketing and manufacturing skills although they are too often underappreciated. This guide, complementing other recent publications, will help change this attitude and bestow the recognition they rightly deserve. It puts Canadian lids firmly on the map.

Postage determined when order is placed Email b.pynn@shaw.ca to place an order